An annotated list of the contents of Gerald Grow’s home page.

It is primarily directed to teachers of courses in these subjects whose students need additional practice in grammar and related topics.

Teaching Learners to be Self-Directed

My most requested article presents a model for developing self-directed, lifelong learners. It is based on an adaptation of Situational Leadership to the classroom and includes many observations about teaching and learning. The internet version includes new material and conceptual cartoons. Originally published in Adult Education Quarterly.

The Writing Problems of Visual Thinkers

When some visual thinkers write, their difficulties with analytical labels, sequence, and context cause distinctive problems. This article analyzes those problems and presents a new theory about the nature of writing problems. The drawing at the top of the page plays a role in this article. Originally published in Visible Language.

Cognitive Reading Theory and its Implications for the Teaching of Writing–with extensive recommendations on how to write for readers who scan, skim, jump around, decide what to read and how deeply to read it, and otherwise proactively, selectively construct meaning from text. Originally a refereed presentation at the Association for Education in Journalism and Mass Communication.

Channels of Attention: Modes of Student Attention that Compete with Classroom Learning

Some students try to convert the classroom into a place where they can employ a kind of attention that enabled them to succeed elsewhere, but this kind of attention often works against learning. This article offers a model for why some students are difficult to teach by describing several “channels of attention” that students may arrive in class “tuned to” — the social, consumer, personality, entertainment, and street channels. This model provides a simpler way of responding to some student differences than those offered in theories on learning styles or cultural styles, and it points to the importance of training students to tune in to the “Educational Channel” that enables them to succeed in a given class.

Implicit in the model is a concept of academic disengagement that is active, in contrast to the passive form usually described.

First published in Essays in Education Vol. 18, Fall 2006. Use the EIE version to print a copy. The copy on this website has been reformatted for easier reading online.

A paper published in ASJMC Insights, Spring 2006. Journalism graduates need to know grammar, yet many enter the major with poor grammar skills, and the accredited curriculum leaves little room for extra instruction in grammar. What has caused the decline in grammar skills and what are some of the methods and issues in teaching grammar to journalism students?

The Principles of Design and Their Shadow

The Principles of Design are often presented as though they are scientific and rational laws that were discovered in a design laboratory, but they arose in a specific historical context. I suggest that these Principles still carry with them the shadow of the very things they were a reaction against — 19th century eclecticism, the arrogance of power and empire, and especially the fear of mass chaos following the First World War. The result, I suggest, is that the Principles favor design that tends toward high Swiss modernism and define as chaotic any design that strays too far from this ideal. The Principles provide a one-sided vocabulary of design that describes the orderly but have fewer resources for describing the rest.

From Self-Defeat to Self-Efficacy
A Series of Diagrams on Helping Students Succeed, with Special Attention to Toxic Self-Esteem

An approach to helping students become more self-directed by helping them learn how to learn from experience. Based loosely on Bandura’s concept of self-efficacy, this paper explores ways to convert the spiral of self-defeat into a spiral of self-efficacy, with special attention to the “attribution” phase of learning and to “toxic self-esteem” as a problem in learning. An interesting and useful but unfinished idea, published here as a working paper.

How Computers Cause Bad Writing

Computers encourage writers to substitute writing for thinking, collaborate in ways that mix styles, self-plagiarize, become trapped in small-screen thinking, and indulge in either prolixity or cryptic brevity. Remedies are recommended. Originally titled, “Lessons from the Computer Writing Problems of Professionals,” this article appeared in College Composition and Communication, Vol. 39, No. 2, May 1988, pp. 217-220. Even though these observations were made in the mid-1980s, they remain surprisingly current.

Ideas for applying M. I. theory to a writing classroom. Exercises are directed to high school or middle school level, but the synopsis of M.I. theory applies at any level. A good brief introduction to M.I. theory and an imaginative application of it to the classroom. A working paper, dealing with Howard Gardner’s original list of seven intelligences.

Over time, magazine covers have changed radically, and that change can be observed by following how magazines used cover lines. This article traces the history of magazine cover lines from early, bookish designs, through the emergence of the poster cover and its dominance, through the integration of type with art, to the proliferation of cover lines at the beginning of the 21st century.

More than 100 illustrations, including an annotated portfolio of poster covers from the 1920s to the 1990s. Published in the Journal of Magazine and New Media Research,Summer 2002, Volume 4, No. 2.

Three alternative approaches to healing– energy healing, mental healing, and spiritual healing– and their implications for teachers. This article seeks ways to extend our ability to understand some of the complexities that take place in a classroom. A good way to gain insight into what we are doing is to consider radically different explanatory systems than the ones we are accustomed to. This article presents three. Originally published in Holistic Education Review.

A short reflection on my cartoon on “Enraged Buddhism” and how visual images can enfold multiple thoughts simultaneously.

In this experimental course, I spent many meetings on exercises from actor training, and others on structured exercises to explore the basic emotions– then used those experiences to approach Romeo and Juliet, King Lear, and A Winter’s Tale. — 1972

A personal account of a moment of insight during an experimental course. — 1972

Notes Toward an Ideal College

My young, naive, optimistic, exuberant vision of the possibilities of education, and life, from 1973. Although time has taught me much about the limits of what I can accomplish, this vision still colors my thoughts about education — and I can never repudiate the eager, hopeful young man who wrote it. With the original cartoon. Appeared as an article in California Education Review.

Additional articles and resources on teaching

Redundicide Spray — Make a visual aid for teaching the concept of redundancy. (humor)

Self-Direction Spray — Make a visual aid for teaching the concept of self-direction in learning. (humor)

What is a Teacher? — a brief inspirational piece

The Do It Wrong Approach to Teaching Writing — a lighthearted way to free up student writing, by having them deliberately write badly, then learn from what they wrote. Originally published in the Journal of Teaching Writing.

Teaching Magazine Writing with a Criteria Checklist — reprint of a Journalism Educator article on spelling out the criteria for an effective article.

The Funnel of Focus — an exercise for focusing a magazine article idea by starting first with ideas vastly too large and working down, then starting with ideas much too small and working up.

Using Humor to Help Students Respond to One Another’s Writing — Kidding students into developing a response list to use when listening to one another read work aloud.

Metaskills of Journalism — The metaskills that underlie the skills of journalism and make those skills possible include Clarity, Compassion, Commitment, Context, Creativity, and Centering.

Kochman catalogued some ways black and white students responded differently under conditions of conflict. A sample of those conclusions is offered here to encourage discussion of an interesting and complex issue.

Free Ideas for Journalism Research.
Several ideas I wish someone would research, including how “click” journalism changes the role of the editor; whether inconsistency is bad; the invasion of the term “narrative”; separating correctness from convention in grammar; and how many grammatical terms students need to know.

A Miscellany of Cartoons

The Monster Who Was Already Here

Written and illustrated as part of a transportation initiative around 1974. Never published.

Being Seen By Rembrandt

This was my midlife crisis project — a study of the great self-portrait by Rembrandt in the Frick Gallery in New York. In this piece, a middle-aged man contemplates a self-portrait Rembrandt painted of himself in middle age. Winner of the 2002 Award for Best Creative Project from the Visual Communication Division of AEJMC. Contains my essay on Joseph Raffael’s painting, Pomo.

A measured tribute to one of the innovative geniuses of 20th century psychology, Wilhelm Reich, who pioneered a number of ideas that continue to be influential today, but who died in a U.S. federal prision in 1957 and had his books burned by the U.S. government.

A long article exploring the implications of a single line in a single TV commercial (“Don’t hate me because I’m beautiful”). In this piece, I ponder the structures created in the human psyche by our capacity to imagine ideals that we cannot achieve–and the implications of advertising’s exploitation of those ideals. An analysis of “envy” constitutes a significant part of the argument. Originally a refereed presentation at the Association for Education in Journalism and Mass Communication; a short version of this paper appeared as a chapter in Images in Language, Media, and Mind, edited by Roy Fox (National Council of Teachers of English Press, 1994).

Advantages of the Xerox 820 Microcomputer over the IBM PC.

In 1982, I was asked to write an analysis that compared the Xerox 820 microcomputer with the newly released IBM PC. I got it completely wrong. This piece is a reminder of the dangers of making well-informed predictions.

The Monster Who Was Already There

This booklet was written and illustrated around 1974, though never published, while I was involved as a citizen in transportation issues in Tallahassee, Florida, shortly after the energy crisis of 1973.

Lost for 30 years, the piece was found and is published here (March 2003), without changes or apologies.

My great-great grandfather’s letters to his wife, mostly from The Battle of Fredericksburg, with some annotations and background.

Florida Parks: A Guide to Camping and Nature.

A Bill of Rights for Normal Neurotics

For decades, I listened to people who insisted that human beings are defective and need to labor to improve themselves. This humorous manifesto stands up for the right to be imperfect.

From a journal entry. 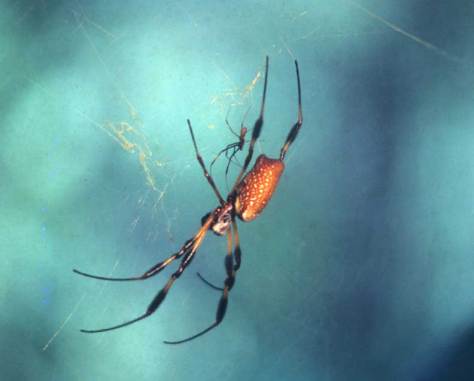 MP3 audio file. A restful toe-to-head guided relaxation that ends in a beautiful garden. about 12 minutes long, plus 5 minutes of cricket sounds at the end. Created as a New Year’s gift during the stressful period of the oil crisis of 1973-4.

A philosophy in miniature, from a dream.

We are Literally Made of Stars

A brief inspirational essay about how we are connected to the universe.

An inspirational poem, “Just to See”

Take What You Need Flyer

Something you can print out and post as a random act of encouragement to strangers.

A list of 52 types of metaphor with humorous examples.